Johnny Depp Is Unloading Art In Prep For Pricey Divorce 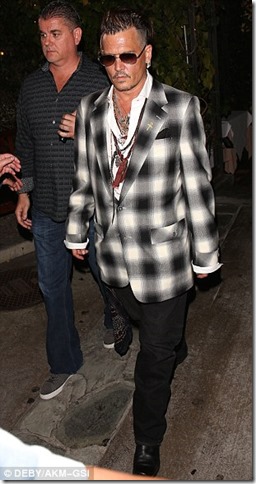 Depp has just sold two Basquiat paintings at 11.5 MILLION DOLLARS at auction, probably because he is nervous that Amber Heard is going to take him for all he’s worth. (Get it, girl)

Six will sell on Thursday, but the first two went under the hammer on Wednesday night – smashing their expected price tags.

A 1981 three-paneled piece titled Self Portrait was expected to land $1.9 million. It was snapped up by New York gallery owner Bill Acquavella for $4.7 million.

The second, another 1981 piece painted on the back of a door titled Pork, had an estimated price tag of $3-5 million. It sold to an anonymous phone bidder for $6.8 million.

Though Depp is already worth an estimated $400 million, the sales will come as some welcome relief while he fights Amber Heard’s abuse claims. The couple did not have a prenuptial agreement.

I can’t wrap my head around the fact that there was no pre-nup!!! Such a rookie move.

Stay at home mom of two, obsessed with Hollywood and celebrity culture and gossip. Have been described as the "Master of Useless Information". I don't own any of these photos and I present anything as FACT.
View all posts by fckwhatyouheard →
This entry was posted in Uncategorized. Bookmark the permalink.